“Here’s A Method That’s Helping Struggling Students Of Classical Arabic Learn More On The First Day Of Class Than Years Of Study Combined!”

How could it be possible to learn and understand Arabic so quickly?

Not all rules and lessons are created equal. In fact, the “80/20 Rule” states that you can expect 20% of your efforts to give you 80% of all the benefits you ultimately achieve.

This is especially true for the Arabic language. It has a very clear core which consists of roughly 20% of all the rules in the 3 sciences of Grammar (nahw), Morphology (sarf) and Rhetoric (balagha).

The rules that belong to this 20% core have the broadest application by far. These are the fundamentals of Arabic that you would expect to encounter in practically every sentence.

But within this 20% core, there is an even DENSER inner-core which we call the “Core-4″. Without getting caught up in math, re-applying the “80/20 Rule” with the 20% core, we get an inner core of no more than 4% of all the total rules in the 3 sciences. This 4% inner core accounts for over half of all benefits! 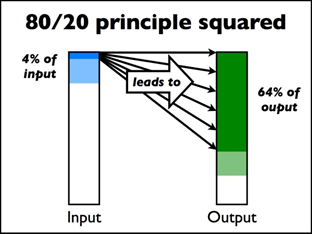 And it is the ability to properly capitalize on this very concept that allows students in our program to grow at an exponential rate. A sister who studied Arabic at Harvard university and subsequently at our intensive puts it best:

… Because of that, in one day of class I learned more than I learned in an entire _year_ of Harvard…. What you need in a class is someone to explain to you how the language WORKS…. In only a few days of the Shariah Program, people were starting to read Arabic fluently … they had already learned what each part of the sentence was, like: this is a past tense verb/this is a noun/ this is a command to a man/ this is an adjective referring to the feminine noun). That does _not_ happen in university Arabic until well after the first full year….

Yes, properly capitalizing on the “80/20 rule squared” allows our students to learn mind blowing amounts of proper and well-structured Arabic in mere days. This is what makes the Shariah Program unique and its curriculum one of the most sought-after in the Western world.

A Method Rooted in Tradition


Now, although I haven’t seen anyone describe the study of Arabic with this 80/20 focus, this method actually isn’t new. It’s the same method that’s been effective in teaching non-Arabs how to understand and properly appreciate the Qur’an from the times of the Sahaba.

It is through the work of brilliant scholars of our past that we can even know where this core 4% is. Through their deep study, they have identified the core and central theme of the language that give us an overall, big picture understanding of how the language works. When a student learns this before anything else, then everything else becomes so much easier.

Each new piece of information has a place to fit within the larger picture. It’s easy to make connections and tie new rules to the ones that we already know. And it’s easier to retain the new information and progress to the next piece because everything is being learned in context.

Experience the method for yourself (for free!)

We believe so strongly in this approach to studying Arabic, that we’ve published a free report about it. This report is now required reading for all of our students and potential students. The 45 page document contains a tremendous amount of teaching including most of the “Core-4%” that we cover in the first weeks of class. We would highly recommend it for any serious student.

Note: Along with the report there’s 2 hours of video training and all of this will be delivered through email so make sure to double check spelling and enter your best email address in the field above so we know where to send the training.

Here’s what Br. Taimur from Toronto says about it: “Having taken a full year of university level Arabic, I can safely say that just the report covers more than that year’s worth of material.”

The report has been downloaded over 2,000,000 times since it was released in March 2012. You can get your own free copy here, just by entering your best email address in the field above. You can unsubscribe at any time and of course we will NEVER share your email address with anyone.